Geomechanics and
Mitigation of Geohazards

Caltech is a world-renowned science and engineering institute that marshals some of the world's brightest minds and most innovative tools to address fundamental scientific questions and pressing societal challenges.  GMG leverages faculty members from the Division of Geology and Planetary Sciences and from the Division of Engineering and Applied Science.

Through collaborative projects, our industrial partners will gain access to cutting edge computational, monitoring and experimental facilities on Campus. These facilities range from a High Performance Computing (HPC) cluster that enables geomaterials, geomechanics and geohazards modeling through a large number of available sophisticated software, both developed and under development at Caltech, as well as commercial packages; to dense arrays of inexpensive accelero­meters that can generate unprecedented high-resolution maps of subsurface geologic structure and ground shaking in near-real time; to high-end specialized laboratories, such as the testing facility for frictional faulting and dynamic fupture that can replicate the physics of complex earthquake ruptures; and also larger-scale experiments on landslides, river deposits and delta such as the ones conducted at the Caltech Earth Surface Dynamics Laboratory.

The Division of Geology and Planetary Science (GPS) maintains a network of Mac and Linux workstations and Linux servers with more than 100 T byes of storage. GMG scientists also have access to a High Performance Computing Cluster composed of 254 traditional computes nodes. Each has 12 cores and 4 GB of RAM per core. The whole cluster is connected with a low latency, high bandwidth network. In addition to the traditional compute nodes, it also has 60 GPU based nodes with a total of 180 Nvidia M2090 GPUs.

The Division of Engineering and Applied Sciences has extensive, general-purpose, networked computing resources (laptops, linux-based PCs and workstations) for word processing needs, routine software development, access to design tools, databases and seismic and engineering data analysis tools. Mechanical and Civil Engineering also has a 620-core PC cluster with 600 Gbytes of memory and more than 5 Tbytes of disk storage. We have at our disposal finite-element computational software packages for linear and nonlinear dynamic analysis of a wide variety of geotechnical and structural problems, including soil-structure interaction. These include ETABS, SAP2000, and Perform-3D distributed by Computers and Structures Inc.; fiber element based code packages STEEL and FRAME-3D, both developed at Caltech for collapse analysis of steel structures; open source finite element software OPENSEES; the FDM code FLAC™ in 2D and 3D  DEEPSOIL; and the FEM codes LS-DYNA, FEAT and DYNAFLOW.

Experimental Facility for the Frictional Faulting and Dynamic Rupture:

Extensive experimental facilities exist for studies of frictional faulting and characterization of the dynamic rupture phenomena. These include a variety of diagnostic tools:

Laboratory earthquake setup with the ultra-high-speed digital image correlation and laser velocimeter diagnostics: The sample contains an interface that mimics a crustal fault prestressed both in compression and in shear. Dynamic rupture is triggered through a local pressure release provided by a rapid expansion of a NiCr wire filament due to an electrical discharge. The Shimadzu HPV-X ultra-high-speed camera records images of the specimen during rupture propagation at 1-2 million frames/sec. The well-developed technique of laser velocimetry is used for comparison of pointwise velocity measurements obtained with the full-field technique at selected locations. 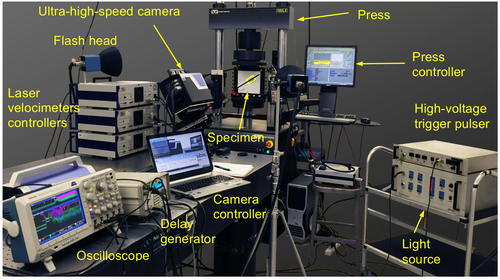 High-Speed Photography System for Digital Image Correlation (DIC): The Shimadzu HPV-X is a high-speed digital camera with an In-situ Storage Image Sensor (ISIS). The ISIS allows the camera to capture images up to 10 million frames per second with 200 ns exposure without the need of gated intensified technology and therefore reducing electronic noise. This property makes the HPV-X suitable for DIC applications. The camera can acquire 128 frames at the full resolution of 400 x 250 pixels or 256 frames at half the resolution.

Velocimeters: Three velocimeters are available, capable of producing highly resolved time histories of particle velocities. The velocimeter is constituted by a modified Mach-Zehnder heterodyne interferometer (Polytec P.I.). The velocimeter combines an internal (reference) laser beam with the laser beam reflected from the surface and obtains the component of the particle velocity along the reflected laser beam. The decoder has a full range scale of ±10 m/s with a maximum frequency of 1.5 MHz and a maximum acceleration of 107 g. The beam spot size is approximately 70μm. The maximum measurement error is 1% .OFV-511) and a velocity decoder (Polytec, OFV-5000).

The Caltech Earth Surface Dynamics Laboratory is a 4000 sq. ft. high-bay space designed to facilitate physical experiments and models to study the processes that erode, transport, and deposit sediment on the surface of the Earth and other planets.  The lab is located on the main Caltech campus, a short walk from the GPS Division.  It includes a state-of-the-art tilting flume  to investigate fluvial bedrock erosion, sediment transport in rivers, and initiation of debris flows.  The lab also includes a river-plume flume for research into backwater dynamics and delta formation. 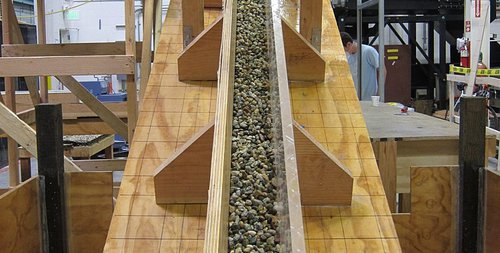